The 4.5 acre International Rose Test Garden at Washington Park is the oldest, continuously operated public rose test garden in the United States.  The primary purpose of the garden is to serve as a testing ground for new rose varieties.  In the beginning, hybridists were encouraged to send roses from around the world to Portland’s garden for testing.

Portland’s identity with roses began in 1888.  Georgiana Burton Pittock, wife of pioneer publisher Henry Pittock, invited her friends and neighbors to exhibit their roses in a tent set up in her garden.  Thus began the annual rose show.  Georgiana and her friends established the Portland Rose Society the next year in 1889.  Jesse A. Currey, a former Rose Society President and Royal Rosarian, chose the garden’s site and convinced city fathers to inaugurate a rose test garden in 1917 with the support of the American Rose Society, City officials, and civic-minded citizens.  At that time, Portland had 20 miles of rose-bordered streets — a strategy to draw attention to the 1905 Lewis and Clark Centennial celebration.  As a result, Portland was dubbed “The City of Roses.”  Over a hundred years later, the IRTG is visited by thousands and continues to be a source of inspiration.

Visit the garden between Memorial Day weekend and Labor Day weekend and learn more by taking in the FREE public tour at 1:00 PM, offered by an Oregon State certified Master Gardener.  Meet at the Rose Garden Store patio at 1:00 PM. 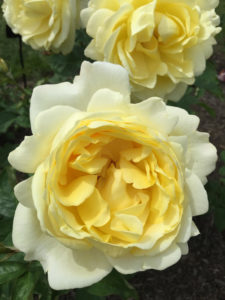